About Knutsford: The town is situated on the Cheshire Plain, between the Peak District to the East and the Clwydian Range in the Welsh mountains to the west. The fertile Cheshire Plains give way to dairy farming and distinct black and white timbered housing. A true flavour of time gone by can still be found across the county and Knutsford is an excellent place to start.

The close proximity to Manchester, Macclesfield, Northwich and Chester has both now and historically helped it become a commuter town for those employed in the region. Today the town’s location gives residents easy access to Merseyside and the Wirral Peninsula.

Knutsford’s main town centre streets, Princess Street (also known locally as Top Street) and King Street lower down (also known as Bottom Street), form the “hub” of the town which can boast of a large number of restaurants, pubs, coffee shops, boutiques, antique shops and art galleries. At the top end of King Street is the pedestrian entrance to Tatton Park. The Tatton estate was formerly home to the Egerton family, and has given its name to Tatton parliamentary constituency.

In 2017, Knutsford was awarded the best place to live in the North West.  The town beat Kendal, Lymm, Saddleworth and West Kirby on the Wirral.  The accolade was given by the Sunday Times (dated 19th March 2013). The paper stated that the attractive town, surrounded by country fields is about earning a living and lifestyle.  It even enjoys a Curzon Cinema, antiques galore and three luxury car dealerships (including the busiest Bentley showroom in the country).  The paper went on to say, a minor outcry was the opening of an Aldi in the town. However, all was forgiven when the locals found a taste for it’s very reasonably priced caviar. So much so, Aldi was had to build an extension to the store, all within a year of it opening.

Knutsford was recorded in William the Conqueror’s Domesday Book of 1086 as Cunetesford (“Canute’s ford”) and the Town’s first charter was granted to William de Tabley by Edward I in 1292.  A court, fair and market followed in 1294. About Knutsford

King Canute (Knútr in Old Norse) was the king of England (1016–1035) and later king of Denmark, Norway and parts of Sweden as well. Local tradition says that he forded the River Lily, which was said to be dangerous then, though other reports say it was the Birkin Brook at or near Booth Mill. The English Place-Name Society gives the name as being derived from the Old English for Knutr’s ford or possibly hillock ford.

Historically, Knutsford became one of the most important towns in Cheshire.  From 1729 and 1873 families would visit the town in their grande coaches for the famous racecourse. 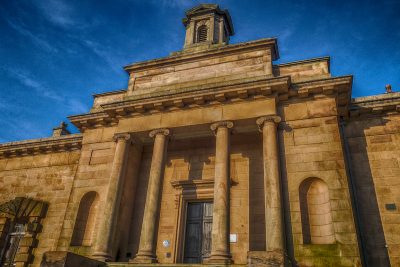 The Quarter Sessions began in Knutsford in 1575, first it was held in the Market Place, before moving to the building in Canute Square which now houses the Royal Bank of Scotland. In 1819 it moved again to the Sessions House on Toft Road.

Alas, the iconic building still stands majestically today. The Grade II listed building is now a hotel, restaurant, and function room provider. It has become one of Cheshire’s most unique venues for weddings, events, and all manner of celebrations.

A gaol was built behind the Sessions House due to over crowding at Chester.  Despite being made larger in 1853 the gaol no longer took prisoners from 1914 and in 1934, the building was demolished.  Today, the site is occupied by Booths Supermarket. About Knutsford

The Victorian novelist Elizabeth Cleghorn Gaskell based her fictional town of Cranford on Knutsford, and during the Second World War Knutsford became home to the American, General Patton.

Other names of people living in the town include a highwayman, painter and playboy.  Edward Higgins came to live in Knutsford in the mid 1750’s.  He lived in Cranford Avenue.  Another Edward, Edward Penny  was born in Knutsford in 1714.  He became the first Professor of Painting at the Royal Academy in London.  Thomas Whaley was better known as Jerusalem Whaley.  He was a native of Ireland and a man of considerable means.  He used his money in pursuit of pleasure and happiness which he never found. About Knutsford

Knutsford Railway Station was opened in 1862 for trains to Altrincham and Manchester.  A year later the line was extended to Northwich. It was another eleven years before passengers could travel to Chester. 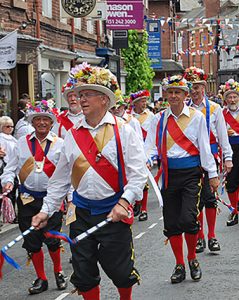 In 2015 the Town Council established a Blue Plaque Scheme to help visitors and residents identify with the history of the town. The aim being to promote recognition and awareness of people, places and events which have a lasting significance in the life of Knutsford.

On the first Sunday of each month the town plays host to the ever increasingly popular MAKERS market.

Knutsford ‘Royal’ May Day is the highlight of the town’s calendar and takes place every year on the first Saturday in May. The procession through the town and the crowning of the May Queen began in 1864 by the local of St John’s, the Rev. Robert Clowes. The prefix ‘Royal’ was bestowed on the event in 1887 by their Majesties King Edward VII and Queen Alexandra, then Prince and Princess of Wales. Knutsford remains exceedingly proud of its Royal connections.

In 2005 Knutsford was named as the most expensive town to buy a house in Northern England, followed by nearby town Altrincham. There is an extremely large range of house prices in the area, currently varying from approximately £79,000 to £3,850,000.