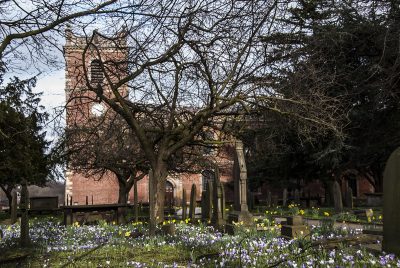 Within Knutsford there are five main churches and several rural one’s throughout the district.  The main five are; St John’s, Brook Street Chapel, St Vincent de Paul RC, Knutsford Methodist and St Cross (over the river on Mobberley Road).  Toft Church (St John the Evangelist) is just outside the town on Toft Road heading towards Holmes Chapel.

For visitors to Knutsford and who are interested in old churches the district is full of surprises.  Mobberley Church, Rostherne, St Oswald’s in Lower Peover, Tabley and Chelford to name but a few, are well worth a visit.

We must always remember that we are guests of the local communities in these places and we should act accordingly.  Many struggle to survive, so if you do visit,  please make a small donation for their continuing upkeep.

St John’s Knutsford is an Anglican parish church enjoying a long history, at the heart of the community, and an evangelical tradition – centered upon Biblical teaching and exposition.

The principal meeting is at 10.15 on Sunday mornings, involving people from a variety of backgrounds and all age-groups. Beginning that meeting – all age-groups, together – is an important expression of being church family. During the service, and to facilitate learning that is designed for each age group, the young people leave to explore the Bible – together with those from their own age-group – in a fun, creative and safe environment.

Located in the middle of the town, the church is involved with many areas of parish and town life, hosting civic services, weddings and funerals, with a thriving youth work which shares the gospel with young people from within the church and from the town.

This beautiful  Grade 1 listed Chapel is the oldest place of worship in Knutsford and it also includes the Brook Street Heritage site.  The graveyard is where Elizabeth and William Gaskell and two of their daughters are buried,  surrounded by numerous members of her family.  Included is  her great great grandfather, Peter Coulthurst.  Peter, who died in 1741 was a founding trustee of the chapel.  The graves of previous ministers and other eminent people, as well as members of  the congregation,  all lie in the well tended grounds.

The Gardens are tranquil and well kept which lie behind the chapel.  There is also a cutting of a Mulberry Tree taken from Shakespeare’s garden in recognition of the two years Elizabeth spent at boarding school in Stratford-upon Avon.

St Cross Church is recorded in the National Heritage List for England as a designated Grade II* listed building, in the deanery of Knutsford, the archdeaconry of Macclesfield, and the diocese of Chester.  It is an active Anglican parish church, with two services every Sunday, a midweek Eucharist each Wednesday, and Morning Prayer most weekdays. The Parish Electoral Roll is 132, and about sixty people attend Sunday morning services.

The original church was dedicated in February 1858.  The main part of the present church was built between 1880 and 1881 to a design by the Lancaster architects Paley and Austin.  The tower was finished in 1887, and the church was completed in 1889 with the addition of the aisles. The final total cost was £7,580 (equivalent to £760,000 in 2015).  The vestries were enlarged in 1906 by the successors in the practice, Austin and Paley.

It is built in brick with terracotta dressings in Perpendicular style. The roof is in red tiles and lead. Its plan consists of a nave with north and south aisles, a tower at the crossing, and a chancel with north and south chapels. A two-storey vestry is on the south, and a porch is to the west of the north aisle. The tower is in three stages with a four-light Decorated style window above which is a terracotta frieze. In the second stage are small square windows. The upper stage contains two-light bell openings and a blind traceriedfrieze. The parapet is of stone with pinnacles at the angles and in the centre of each side.

On the  20th March 1738, the Rev. John Wesley preached for the first time in the town from the steps of a house near the George Hotel.

If we take this event as marking the starting point of Methodism in Knutsford, then the opening of the present church in 1865 followed an already-established history of over 120 years of Methodist-style worship in the town. The very same steps from which it is believed that Wesley preached are now preserved (presented to the Chapel in 1932) in front of the current church building.

An attached plaque quotes an entry from Wesley’s diary at the time. Thirty seven years later (April 1775) John Wesley, then aged 72, returned and preached again in Knutsford, this time in a room near the Cross Keys Inn.

In 1860, some sixty four years after the opening of their first Chapel the Knutsford (Wesleyans) Methodists recognized that they had grown to a size of membership (around 80-strong) which demanded a larger building – and, to accommodate it, a new and larger site.

The style of the Chapel is Early English Gothic, built to a rectangular floor plan, 63 ft. by 37 ft. (19.4m x 11.4m). In the original-arrangement (still evident in the gallery at the west end), one aisle on each side divided the seating into three blocks of open pews, with inclined backs and book-rests.

The church was built in the grounds of the old church in 1981, and boasts a modern octagonal design. It sits close to the centre of the town, and adjacent to Tatton Park. It serves a wide area of the local Roman Catholic community, and is a regular place of worship.

Twenty years after the original build, the Apse was constructed, incorporating a beautiful Harry Clarke stained-glass window.  The design of the church allows the congregation to feel close to the centre of the celebrations, with unobstructed views of the altar and lectern.  The altar with matching ambo is the focal point within the Church and is of a simple, yet elegant marble construction.

This Harry Clarke-style window was salvaged from a Convent Chapel in Ireland and installed as the focal point of the apse in St Vincent’s in 2001. It depicts the Crucifixion and the figures of Our Lady and St John the Evangelist.