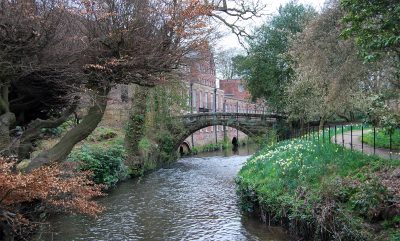 Quarry Bank Mill is in Styal, approximately 10 miles from Knutsford. It is one of the best preserved textile mills of the Industrial Revolution and is a museum of the cotton industry. Recorded in the National Heritage List for England as a designated Grade II listed building, it inspired the 2013 television series The Mill.

Quarry Bank, Styal has two different faces.  One is of cottages standing just as they did in Elizabethan days, thatch and all, one up, one down, while the other is the large, two garaged houses with ions on the gateposts and very colourful gardens indeed.  It is the older section that has visitors by the hundreds gazing the cottages threaded between the long rows of brick and slate.

Samuel Greg leased land at Quarrell Hole on Pownall Fee from Lord Stamford, who imposed a condition that none of the surrounding trees should be pruned, felled or lopped, maintaining the woodland character of the area. The factory was built in 1784 by Greg to spin cotton. When Greg retired in 1832 it was the largest such business in the United Kingdom. The water-powered Georgian mill still produces cotton calico. The Gregs were careful and pragmatic, paternalistic millowners, and the mill was expanded and changed throughout its history. When Greg’s son, Robert Hyde Greg, took over the business, he introduced weaving. Samuel Greg died in 1834.

The estate surrounding the mill was developed and Greg converted farm buildings in Styal to house workers. As the mill increased in size, housing was constructed for the workers.  A chapel and a school were built by the Gregs who moved into Quarry Bank House next to the mill.

The estate and mill were donated to the National Trust in 1939 by Alexander Carlton Greg and are open to the public. The mill continued in production until 1959. In 2006 the National Trust acquired Quarry Bank House and its gardens and, in 2010, the gardener’s house and the upper gardens. In 2013 the mill received 130,000 visitors and the trust launched an appeal to raise £1.4 million to restore a worker’s cottage, a shop and the Greg’s glasshouses and digitise records relating to Gregs and the mill workers.

They say the name ‘Styal’ meant ‘the secret place’, because when the taxman long ago, came to check on how much wheat and barley were being grown, the village was suspiciously quiet and vacant.  Just like today and although there is no proof of it’s authenticity, it makes a good story!

Villagers have a shop  and a post office all under on roof, a railway line with trains in each direction every half hour. There is a Garden Centre, an inn named the Ship, a war memorial and the old Co-op, long shut I’m afraid.  In the window old fashioned Fry’s Cocoa tins and a bowl of brown eggs are displayed, along with other relics Grannie may remember.  There is a church, village green, two football teams and a white-clad cricket team.  The squirrels are grey but there isn’t a traffic light to be seen.

Well worth a visit…..